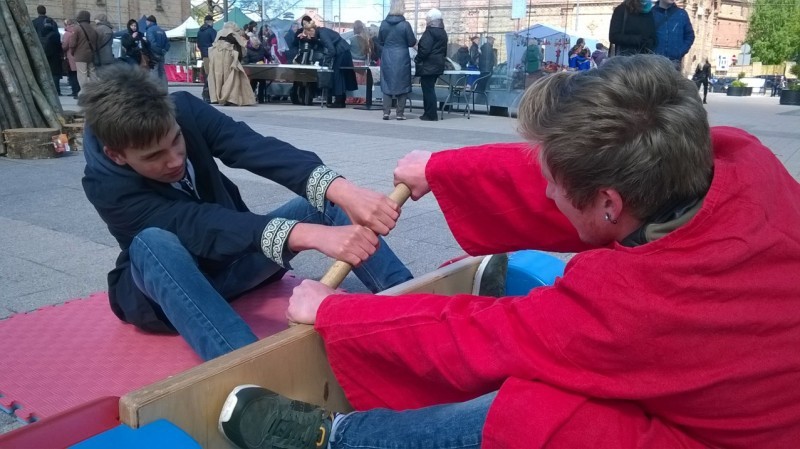 The “May Earl 2015” historic festival took place in Riga. It was attended by the Latvian Association of Ethnosport, presenting a tournament in nūjas vilkšanā – stick pulling.

The festival hosted a tournament in traditional stick pulling with a direct grip – nūjas vilkšanā. For the time being, this has been a demonstration tournament aimed at drawing attention to the traditional games of the peoples of Latvia. Everyone who participated received commemorative diplomas.

The next event on the agenda of the Latvian Association of Ethnosport is a tournament in the traditional games of the Livonians among schoolchildren. It will take place in the Kolka village on May 28.

The Kolka village is on Cape Kolka of the Kurzeme peninsula, where the Livonians traditionally lived. This former Kurland area is now the announced ethno-cultural reserve – the Livonian coast, where the ancient Livonian settlements are situated. Most of them are now abandoned and used as a summer residence, while the Livonians mostly remained only in the Kolka and Dundaga, the district center. This conditioned the venue for the tournament.

Technical support of the Latvian Association of Ethnosport is provided by the World Strongmen Federation (WSF) – a worldwide partner of ethnosport. In addition, Vladislav Redkin, GM of WSF, is a Latvian citizen.

The “May Earl 2015” festival also held jousting tournaments of historical reconstruction as well as dance competitions.