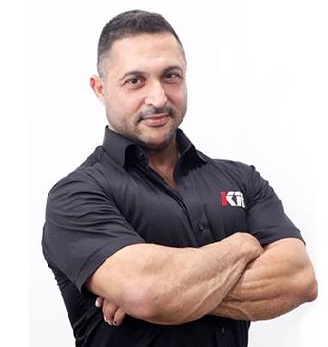 This is Kaizzad Capadia here.
After a very long time I have written a post on the K11 FB page and it is for a very very special reason.

Since I don’t look strong anymore, I just simply HAD TO find a picfrom the past that made me look strong enough for this Post .
And in the super human world of Strongmen – THAT IS WHAT A DUMBBELL LOOKS LIKE!!!

Sounds Super Human?
Well these Super Humans exist and they compete in the extreme sport of STRONGMAN.

Believe it or not, but we Indians, will have the privilege of seeing these behemoths in the flesh on the 9th & 10th of April, 2016. (That’s just a few days away.)

Now how did that happen???
Well last year, I was privileged & honoured to be appointed as the General Secretary of the Strongman Federation Of India (SFI).
SFI is the only federation in the country to be affiliated to the apex body in the world of Strongmen Sport – The World Strongmen Federation (WSF).

For this honor, we have another special friend to thank & that is VLADISLAV REDJKIN, General Secretary of the WSF.

Pradeep Baba Madhok hails from Benares and he along with Vladislav Redjkin, made MY DREAM of bringing the Worlds Strongest men to India come true.

On the backing of Baba Madhok, and the support of Vladislav Redjkin, the spiritual capitol of India – Benares (Considered to be Lord Shiva’s abode), will host the WSF Strongman World Cup on the 9th & 10th of April.

I STILL CANNOT BELIEVE IT IS REALLY HAPPENING!!!

It is an extremely special World Cup for 3 BIG REASONS:
FIRST REASON
We are inviting LEGENDS.
Living legend of the strongman sport, 4-Time World’s Strongest Man – MAGNUS VER MAGNUSSON will be the Chief Referee. Can you imagine that?

Living Weight Lifting Legend LEONID TARANENKO, the man with the biggest Clean & Jerk (266 kgs) ever in the history of the sport of weight lifting (A record that still stands as the heaviest weight ever lifted from the floor to over-head), will grace the occasion & will also hold a Master Class on the Clean & Jerk.

The 2004 Olympic Gold medalist DMITRY BERESTOV, a man with an immense 200kg Snatch, will also grace the event & will hold a Master Class on the Snatch.

As a special guest, we have the privilege of having one of the most popular strongmen athletes, a legend from Ireland, and arguably, one of the strongest men in the world during his time – GLEN ROSS (Big Daddy), 8 times UK & Britain’s Strongest Man & known for some real freaky feats such as – In 2003, Ross lifted three cars with the rear wheels completely off the ground, the combined weight including the frames of the three Citroen Saxos was almost 3 tonnes. He will be felicitated.

SECOND REASON
MARK FELIX who has a Hummer Tyre Strongman Deadlift of an incredible 1128 lbs at the Arnold Classic is a competitor in the Indian WSF World Cup. Just shows the calibre of this World Cup.

THIRD REASON
We have 12 Strongman from 11 countries – Poland, Norway, England, Russia, Ireland, Malaysia, Estonia, Latvia, Lithuania, Belarus & Uzbekistan.
Each country sending their strongest for this battle of the Titans happening at Benares, India on the 9th & 10th of April.

10 of India’s strongest athletes will be chosen by the Head of the Asian Powerlifting federation & Indian Powerlifting Federation, Dronacharya Awardee – MR. BHUPENDRA DHAVAN, as special invitees to observe the event & understand the sport. They will then be groomed over the next couple of years to be real contenders in the international arena of the Strongman Sport. Their names will be declared by the 1st of April.

IN ALL MY 25 YEARS IN THE FITNESS INDUSTRY, I HAVE NEVER BEEN MORE EXCITED!!!

A BIG THANK YOU TO:
Baba Madhok, Vladislav Redjkin & Bhupendra Dhavan, for making this happen.

DEVOTIES OF STRENGTH – Do you need any more reasons for making this pilgrimage to BENARES on the 8th & 9th of April???

If you are an Indian & you are a true worshipper of strength;
then on the 8th & 9th of April – YOU WILL BE IN BENARES…

The abode of the strongest, most powerful god – Lord Shiva, will now be a host to the Strongest Humans ever to have walked this planet.

If you wish to witness this historical event, simply be in Benares on those dates as entry to view the World Cup is free. You simply have to spend on travelling & stay.

If you wish to learn the Clean & Jerk and the Snatch from the world’s best and attend the Master Classes by Leonid Taranenko & Dmitry Berestov, then you will have to register yourself at the
K11 ACADEMY OF FITNESS SCIENCES.