Visualization of the Ethnosport Challenge project 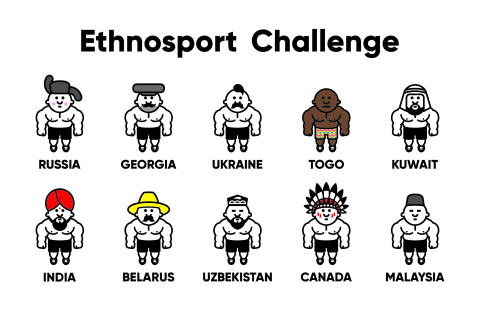 The work on visualization of the Ethnosport Challenge project, which performed by the well-known artist Andrey Lublinsky, was completed.

The main idea of visualization was the ethnic images of the strongmen, made in a characteristic style for the author. “The work was interesting, I have never worked with a live show, but the hardest part was to find the details that would give the national color to funny characters,” shared the impression of the work done by Andrey Lublinsky.

The project leader, the president of the Ethnosport World Society, Dr. Alexey Kylasov noted that the graphical decision of Andrey Lublinsky allows creating ethnocultural images of the strongmen in an endless sequence. Now there are the first 10 images – symbols of the show of the World Series of tournaments, which will take place this year. “The growing image of our cooperation will be the global gallery of images of the strong, open to all peoples, which fully meets our main idea – promoting local traditional games,” said Alexey Kylasov.

Tournaments of the World Series Ethnosport Challenge will be of two levels – national and international. The first will be the national tournament of Ethnosport Challenger: Moscow vs Russia, which will held within the framework of the Moscow Ethnosport Festival at the opening of the summer sports season in Luzhniki on May 1.

Planned the first international tournament of the World Series will be Ethnosport Challenge: Georgia vs World, which will held on May 19 in Tbilisi. But we canceled it. First will be in Belarus on 30 of June!

Andrey Lublinsky – professional designer and artist, curator, graduate of the design faculty of the St. Petersburg State Art and Industrial Academy. Stieglitz. Trained in the Higher Art School “Berlin – Weissensee” (Germany). Member of the Union of Artists of Russia. Member of the group “Witchcraft artists”. Since 2017 – Curator of the profile “Communication Design” in the School of Design, HSE – St. Petersburg.

Andrey Lublinsky is the author of red men in Perm, a huge yellow duckling in Moscow’s Gorky Park, a crocodile at the Flacon design plant and a large-scale installation of Friendship of Peoples at VDNKh. The works of Andrey Lublinsky are in museum and private collections in Russia and abroad, including: in the collection of the State Russian Museum (St. Petersburg), the Museum of Modern Art PERMM (Perm), the Museum of Modern Art “Erarta” (St. Petersburg), the School of Management SKOLKOVO Moscow), Dukley Gardens (Budva).

Posted in News
« New president of ASAF is elected
‘The Competition Day Preparation Strategies of Strongman Athletes’ survey »
Both comments and pings are currently closed.