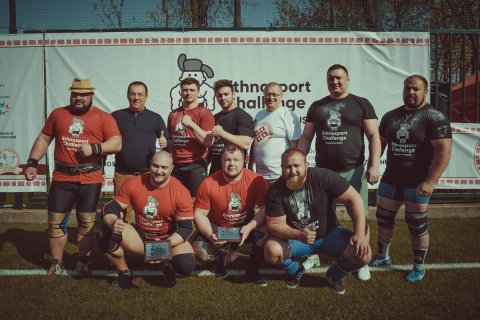 The Moscow Ethnosport Challenge 2019 was organized by the Department of Sport of Moscow city, the Ethnosport Federation of Russia, the World Ethnosport Society, and the World Strongmen Federation. Over 100 thousand spectators watched the full video broadcast of the event.

The winner in the discipline of ethnosport-strongmen in the Moscow Ethnosport Challenge 2019 – a team of Moscow, whose representative – David Shamei became the winner in the individual competition.

David Shamei showed the best result in the log lift weighing 7 pounds, log holding weighing one and a half pounds and racing with the bag weighing of 7 pounds. In throwing the bag weighing 2 pounds, defeated Vladimir Shiryaev from Orel city. In the Russian traditional wrestling za-vorotok Andrei Smirnov became the best, which was expected because he is a candidate for the master of sports in judo and sambo, as well as rugby.

The winner in the game of Rusmyach in Moscow Ethnosport Challenge 2019 – the team of Moscow. In the final match, the team Svarog (Moscow) defeated the team Ramenskoye Wrestlers (Moscow region).

The program of the Russian Games was open areas for playing babki game, balls game, lapta game, hurling, traditional archery and youthful playing. In the final, as always, there was a big battle of the Wall Fistfighting.