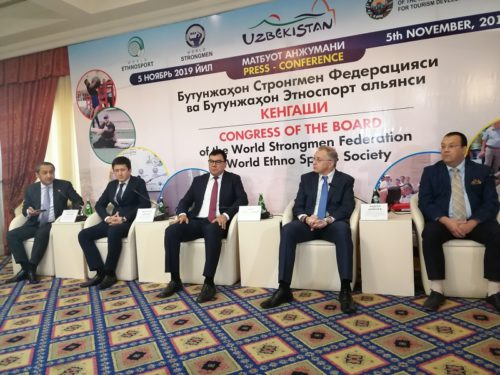 In his speech at the opening of the meeting, Dr. Alexey Kylasov, President of the World Ethnosport, underlined the special role of the strongman movement in maintaining and safeguarding traditional sports and games, and in particular, said:

“It is this type of competition that has come down to us from the depths of centuries practically unchanged and still remains the core of many traditional games of most nations, so we welcome the decision of our Uzbek partners to establish a joint national federation for ethnosport and strongman sports.”

The plans for interaction between the World Ethnosport and the WSF were presented by Ravshankhon Juraev, who was appointed Head of the Joint Alliance of councils by the decision of the Board of both organizations. The Uzbekistan Ethnosport and Strongman Federation was led by Abdulaziz Akkulov, the Acting Chairman of the State Committee of the Republic of Uzbekistan on Tourism Development.

Great importance in the development of World Ethnosport is given to cooperation with UNESCO. Therefore, Andrei Chevelev, Head of the UNESCO Asia-Pacific Unit, was invited to attend the event.

A working meeting with him was held by Aziz Abdulhakimov, Deputy Prime Minister of the Government of Uzbekistan, who also chairs the National Commission of the Republic of Uzbekistan for UNESCO.

The meeting was also attended by Abdulaziz Akkulov and Ravshankhon Juraev, as well as by Alexey Kylasov, who represents (along with World Ethnosport) the National Commission of the Russian Federation for UNESCO. The meeting participants discussed and supported Alexey Kylasov’s proposal concerning the implementation and joint international promotion of the innovative “Ethnosport Programme to Safeguard Games Heritage”.

Andrei Chevelev noted in particular, that the presented programme meets the spirit and goals of the UNESCO Convention for the Safeguarding of the Intangible Cultural Heritage, as well as of the Memorandum of Cooperation between UNESCO and the Government of Uzbekistan signed in 2018. He emphasized that it is necessary to constantly seek for new forms and approaches aimed at preserving the cultural heritage, which is an ongoing process and gave an example:

“If a child has not heard traditional songs and folklore tales from his parents or has not played traditional games with his peers, then he will not only never consider them his own, but also will not be able to transfer all this spiritual heritage to his descendants, to ensure continuity in development of the country and of the society. Our task is to help preserving the cultural heritage and ensure continuity between generations. To do this, we should use all the capabilities of the State and the UNESCO platform.”

This proposal was supported by Aziz Abdulhakimov, who suggested including a plan for launching the new programme into the “Roadmap on Cooperation with UNESCO”, developed by the Government of the country in the framework of the mentioned bilateral Memorandum. The Deputy Prime Minister stressed in particular:

“We are pleased to see a very positive trend in expanding cooperation between Uzbekistan and UNESCO. I would specially like to mention the visit of the President of Uzbekistan to UNESCO Headquarters in Paris in October 2018, and the visit of the Director-General of UNESCO, Ms. Audrey Azoulay, to Uzbekistan in August 2019. We have introduced a systematic approach to the development of our interaction and have begun practical implementation of the Cooperation Programme between the Government of Uzbekistan and UNESCO.”

Given the importance of developing Ethnosport as an element of national identity and an integral part of the country’s Intangible Cultural Heritage, Deputy Prime Minister Abdukhakimov said that he would raise this issue in his statement addressed to the delegations of 193 UNESCO Member States at the forthcoming 40th session of the UNESCO General Conference in Paris.

The results of both meetings were presented to journalists during the final press conference at the Intercontinental Hotel. After talking to reporters, the participants exchanged souvenirs and gifts.