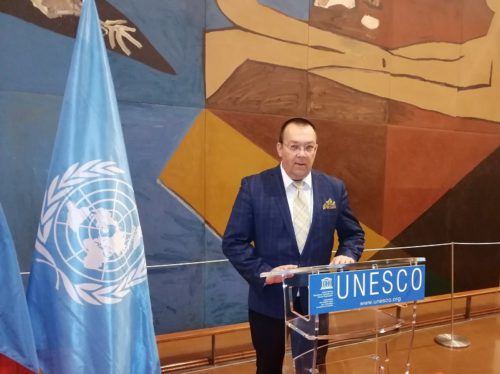 At the meeting of the 14th session of the Intergovernmental Committee for the Safeguarding of the Intangible Cultural Heritage of UNESCO in Bogota (Colombia), it was decided to accredit the World Ethnosport as an advisory partner in the framework of the Convention.

“World Ethnosport was the first international organization to present a programme for actualization and developing traditional sports and games around the world. This programme provides the governments of the State-Parties of the Convention with a methodology for implementing and permanent monitoring the social effectiveness of measures taken by authorities and the efforts of non-governmental organizations”, – said Alexey Kylasov, President of the World Ethnosport.

The basis of this program was the scientific development of the Likhatchev Russian Research Institute for Cultural and Natural Heritage. The implementation of this program was made possible thanks to the support of the National Commission of the Russian Federation for UNESCO.

The next stage in the development of the World Ethnosport will be interaction with the European Union, which will be implemented jointly with the Government of Latvia, in whose jurisdiction this non-governmental organization is currently located.

The World Ethnosport has partnerships with other UNESCO-accredited organizations whose activities contribute to the safeguarding of traditional sports and games. The European Traditional Sports and Games Association is already a continental partner of the World Ethnosport. The International Centre of Martial Arts for Youth Development and Engagement under the auspices of UNESCO (UNESCO ICM) and the World Martial Arts Union (WoMAU) are partners in the collaboration of combat sports associations. Interaction with TAFISA on the implementation of traditional sports and games in the Sport for All movement will continue.

Posted in News
« A joint meeting of the Council of World Ethnosport and the Council of the World Federation of Strongmen
GAAPSF annual congress »
Both comments and pings are currently closed.