WSF General Manager Mr. Vladislav Redkin, General Secretary of WSF, arrived in India to officially welcome Mr. Madhok and Mr. Kaizzad Capadia who will be on the Executive Board of WSF. 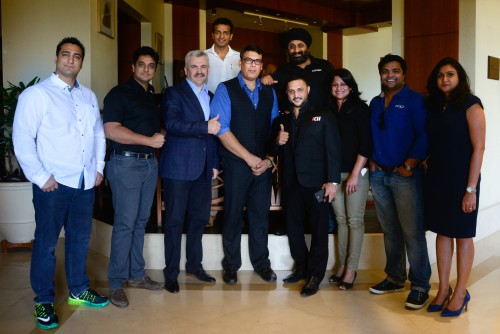 Strongest Indian which is modelled on the lines of the international Strongman show, will be India’s first and only reality strength-based show inviting entries across 25 Indian cities. The regional winners will then participate in the grand finale to be held at the Baga Beach in Goa 0n 11th October, 2015. The show will be telecast on the NDTV channel as well as a leading Hindi entertainment channel.

Strongest Indian will also have a PRO Division which will see some of the world’s biggest Strongmen from 10 countries attend and participate in the event which will be a spectacle of sorts involving such unconventional lifts as the Farmer’s Walk, Truck Pulling, Boulder Lifting amongst many others.

“Today we’re opening a new page in the history of Strongman sports,” says Vladislav Redkin. “India has stepped up to the Strongman podium and commenced a new era for all aspiring strength athletes. We’re branching out in three new directions: One of them will be Ethnosport which focuses on developing traditional kinds of Indian strength games. Second, we will be adding three new weight categories for athletes to expand the number of participants. The third will be a Strongman Battle with a new team format. Baba is a famous name in bodybuilding and now he’s the president of WSF. We’re happy that we signed the contract and received new possibilities in this Strongman sport development.”

Mr. Madhok: Since ancient times, there have been several competitions across the globe, be it in Rome during the times of coliseum or be it in Mahabharata. The nature of humans has always been to be stronger with one another, to look robust and to leave an impact on the public in general. The World Strongmen Federation is one such platform which gives a chance to people across all strength sports and even to a normal healthy human being to show off and prove their strength supremacy on to the world. We have a complete transparency in judgment and an ongoing excitement in each level of this sporting event. For example, a competitor pulling a truck can be judged by bare eyes as a winner over other competitors who pulls the truck either slower than the latter or does not pull at all. So this is a game of pure strength devoid of drugs (anabolic) but pure sporting event.

Kaizzad: The K11 Fitness Academy has been the torch bearer of strength training sciences in the country. We have been teaching, preaching, practicing the fact that along with endurance and flexibility, it is extremely important for any man and woman to equally emphasize physical strength to be truly fit. Strength training is the form of exercise that is the most closely related to anti-aging. For education to really penetrate, I recognise the importance of an exciting event. Towards this goal, I decided to have India’s first WSF approved strength event – Strongest Indian.

Whether you’re interested in fitness or strength, no one can ignore the unbelievable feats of strength that will be showcased at the Strongest Indian. Cars will be lifted, trucks will be pulled, huge boulders will be lifted; I expect the whole country to be riveted by these super humans of India. It’s time they got their share of the glory.

Samit: Neulife has always been at the heart of the fitness industry, having pioneered the category of sports nutrition since 1999. Strongest Indian is the perfect culmination of years of effort and contribution towards the sport of strength, which is finally getting its due recognition within the fitness industry.

Rizwan: My first ambition was to be as physically strong as I could be. But the entrepreneur in me could not be ignored and thus, today, my goal is to provide facilities across the country that cater to the strength and fitness of the nation. Through YFC – Your Fitness Club , I wish to make a strong India. The Strongest Indian is a godsend opportunity for me to further my goal. Hence, my brand YFC clubs across India will be the facilities where the athletes will train to earn glory at the Strongest Indian. They will also be the venues for the elimination rounds before the finals.

Harmeet: Athletes depend on highly stable and reliable equipment to avoid injuries. Cybex takes great pride in providing such equipment; after all, our company has been very passionate about making people aware of their safety while training. To ensure consistency and reliability, we will be sponsoring the same equipment during the athletes’ training and for the Strongest Indian competition as well.

Posted in News
« Ethnosport in Latvia
The New WSF President will Continue to Cooperate with Ethnosport »
Both comments and pings are currently closed.

One Response to “STRONGEST INDIAN LAUNCHE”